The documentary about Misty Copeland is dancing toward Blu-ray in February.

In an announcement to retailers, MPI is preparing 'A Ballerina's Tale' for Blu-ray on February 2.

Iconic ballerina Misty Copeland made history when she became the first African-American woman to be named principal dancer of the legendary American Ballet Theater. Get the incredible, behind-the-scenes story of how she overcame outmoded ballet culture stereotypes and near career-ending injuries to become one of the most revered dancers of her generation. More than just a ballet success story, A Ballerina's Tale is a hugely inspirational and universal tale of perseverance.

You can find the latest specs for 'A Ballerina's Tale' linked from our Blu-ray Release Schedule, where it's indexed under February 2. 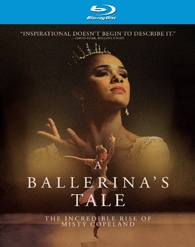 Discs mentioned in this article: (Click for specs and reviews)
A Ballerina's Tale (Blu-ray)