The action-thriller starring Marko Zaror is planned for Blu-ray next month.

In an early announcement to retailers, MPI is working on 'Redeemer' for Blu-ray on September 1.

In this pulse-pounding actioner, an ex-hitman (martial arts master Marko Zaror) seeks redemption for his sins by meting out violent justice to those who would prey on the innocent. Known on the streets as the Redeemer, Pardo is a vigilante desperate for redemption and earns it by offering criminals the chance to ask forgiveness for their crimes or pay the ultimate price. When his bloody path crosses that of would-be drug lord Braddock (Noah Segan, Looper, Deadgirl), he must fight an entire underworld organization while keeping one step ahead of a vengeful assassin seeking to undo his virtuous work.

Specs and supplements and have yet to be revealed, but suggested list price for the Blu-ray is $29.98.

You can find the latest specs for 'Redeemer' linked from our Blu-ray Release Schedule, where it is indexed under September 1. 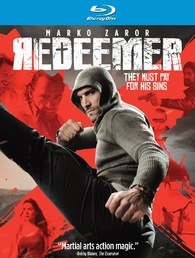