The horror film is slated for an April Blu-ray release.

In an early announcement to retailers, MPI will be releasing 'Cherry Tree' on Blu-ray on April 5.

Faith's world is turned upside down after she finds out that her beloved father is dying. When the mysteriously alluring Sissy Young becomes her new hockey coach, Faith has no idea that Sissy is the head of a witches coven that has resided in her home town of Orchard for centuries. Using the fruit of an ancient cherry tree in a bloody ritual, the witches can bring the dead and dying back to life, and when Sissy offers to cure Faith's father, she lures the young woman into a dangerous deal that will leave her fighting for her life.

The Blu-ray will feature 1080p video, a lossless 5.1 soundtrack, and supplements include a making-of featurette and a trailer.

You can find the latest specs for 'Cherry Tree' linked from our Blu-ray Release Schedule, where it is indexed under April 5. 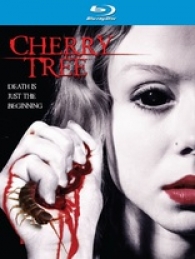