The horror sequel will sink its fangs into Blu-ray next month.

In an early announcement to retailers, MPI and Dark Sky Films is working on 'Stake Land 2' for Blu-ray on February 14.

Reuniting one of horror cinema's most memorable heroic teams, STAKE LAND II is an epic exploration of a post-apocalyptic world ravaged by bloodthirsty vamps and social collapse, where only the strongest survive.

When his home of New Eden is destroyed by a revitalized Brotherhood and its new Vamp leader, Martin finds himself alone in the badlands of America with only the distant memory of his mentor and legendary vampire hunter, Mister, to guide him. Roaming the wilderness of a steadily decaying country, Martin goes in search of the one man who can help him get revenge.

You can find the latest specs for 'Stake Land 2' linked from our Blu-ray Release Schedule, where it is indexed under February 14. 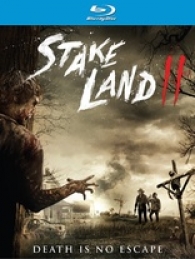