The werewolf flick will howl at Blu-ray in March.

In an early announcement to retailers, MPI will be releasing 'Late Phases: Night of the Lone Wolf' on Blu-ray on March 10.

Blind war veteran Ambrose McKinley (Nick Damici, 'Stake Land,' 'We Are What We Are') has recently moved to Crescent Bay, a seemingly peaceful community on the outskirts of a dense forest. On his first night in his new home, McKinley hears his elderly neighbor attacked by something he's convinced isn't human.

When the creature then kills his seeing eye dog, McKinley's thirst for justice turns into a one-man vendetta against the monster that's terrorizing his neighborhood. And when he's stonewalled by both the police and his fellow residents, he decides to gear up and prepare to fight the beast one-on-one. Now it's man vs. myth as the take-no-prisoners McKinley readies himself for what could be his final battle.

Specs have yet to be revealed, but supplements include: Audio commentary with director Adrian Garcia Bogliano, Making of featrette, FX featurette, and original trailer.

You can find the latest specs for 'Late Phases: Night of the Lone Wolf' linked from our Blu-ray Release Schedule, where it is indexed under March 10. 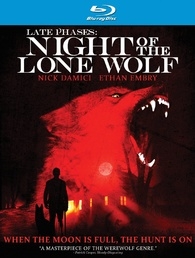