The third season of the acclaimed series will pillage Blu-ray in October.

In an early announcement to retailers, 20th Century Fox/MGM will be releasing 'Vikings: The Complete Third Season' on Blu-ray on October 6.

Prepare to raid and wage battle once again, in an ancient kingdom dominated by vengeance, lust and thrilling conquest, in Season 3 of VIKINGS. The gripping family saga of Ragnar, Rollo, Lagertha and Bjorn continues as loyalties are questioned and bonds of blood are tested. Now king of his people, Ragnar remains a restless wanderer, leading his band of Norse warriors on epic adventures from the shores of Essex to the mythical city of Paris. But stunning betrayals and hidden dangers will test Ragnar's courage and strength like never before. The Season 3 Blu-ray and DVD include nearly two hours of extra content sure to please the most die-hard fans of the series.

The Blu-ray set will feature 1080p video, a lossless 5.1 soundtrack, and supplements include: Athelstan's Journal (Parts 1 and 2) – Provides insight into the character of "Athelstan," as he seeks answers about his direction in life and seeking the honorable path, Heavy is the Head: The Politics of King Ragnar's Rule; A City Under Siege: Creating and Attacking Paris; Audio Commentary on "Born Again" and "Breaking Point" featuring Michael Hirst and Linus Roache (EXTENDED); and Deleted Scenes.

Blu-ray Exclusives include: The Guide to the Gods – An interactive exploration of the various Gods in Nordic mythological lore, which include: Odin, Thor, Loki, Frigg, Baldr, Hel, Freyja, Freyr and Njordr; and Extended Versions of All Episodes.

You can find the latest specs for 'Vikings: The Complete Third Season' linked from our Blu-ray Release Schedule, where it is indexed under October 6. 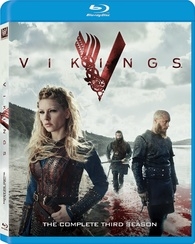