The epic miniseries is now available for pre-order.

In an early announcement to retailers, MGM is preparing 'A.D. The Bible Continues' for Blu-ray on November 3.

A.D. picks up where the smash hit, 'The Bible,' left off, continuing the greatest story ever told and exploring the exciting and inspiring events that followed the Crucifixion of Christ. As most of the world knows, the Crucifixion was only the beginning of the story. The immediate aftermath of Christ's death had a massive impact on his disciples, his mother Mary, and key political and religious leaders of the era, completely altering the entire world in an instant. Watch as the disciples struggle to survive and share their beliefs, guiding us from the sorrow of Christ's ultimate sacrifice to the awe-inspiring wonder of the Resurrection and beyond. From Executive Producers Roma Downey and Mark Burnett comes an uplifting spiritual journey through the later chapters of biblical history.

Specs have not been detailed yet, but supplements will include: Continuing the Bible; Casting A.D.; The Past Comes Alive; Touring the Sets; The Fabric of the Time; and Recreating the Power of God.

You can find the latest specs for 'A.D. The Bible Continues' linked from our Blu-ray Release Schedule, where it's indexed under November 3. 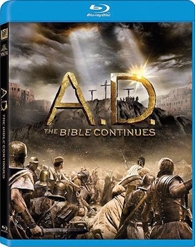 Discs mentioned in this article: (Click for specs and reviews)
A.D. The Bible Continues (Blu-ray)