As previously reported, MGM is preparing to release 'Spectre' on Blu-ray with a release date of February 9.

A cryptic message from the past leads James Bond (Daniel Craig) to Mexico City and Rome, where he meets the beautiful widow (Monica Bellucci) of an infamous criminal. After infiltrating a secret meeting, 007 uncovers the existence of the sinister organization SPECTRE. Needing the help of the daughter of an old nemesis, he embarks on a mission to find her. As Bond ventures toward the heart of SPECTRE, he discovers a chilling connection between himself and the enemy (Christoph Waltz) he seeks.

Specs haven't been revealed yet, but supplements include: SPECTRE: Bond's Biggest Opening Sequence; Video Blogs; and a Gallery.

You can find the latest specs for 'Spectre' linked from our Blu-ray Release Schedule, where it's indexed under February 9. 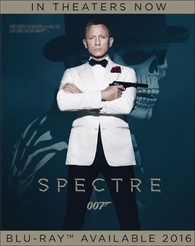