The action flick based on William Goldman's novel will hit Blu-ray in March, and you can pre-order the disc here.

In an early announcement to retailers, Lionsgate is preparing 'Wild Card' for Blu-ray on March 31.

Nick Wild (Jason Statham) is a Las Vegas bodyguard with lethal professional skills and a personal gambling problem. When a friend is beaten by a sadistic thug, Nick strikes back, only to find out the thug is the son of a powerful mob boss. Suddenly Nick is plunged into the criminal underworld, chased by enforcers and wanted by the mob. Having raised the stakes, Nick has one last play to change his fortunes...and this time, it's all or nothing. From two-time Academy® Award-winning writer William Goldman (Best Original Screenplay, 'Butch Cassidy and the Sundance Kid,' 1969; Best Adapted Screenplay, 'All the President's Men,' 1976).

Specs have not been detailed yet, but supplements will include: "Original Sin: Las Vegas and the Characters of Wild Card" featurette; "Script Vignette" featurette; and Audio Commentary with Director Simon West.

You can find the latest specs for 'Wild Card' linked from our Blu-ray Release Schedule, where it's indexed under March 31. 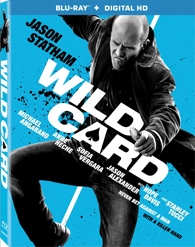 Discs mentioned in this article: (Click for specs and reviews)
Wild Card (Blu-ray)