Prepare yourselves for a double dose of Madea on Blu-ray this January.

In an early announcement to retailers, Lionsgate is working on 'Tyler Perry’s BOO! A Madea Halloween' for Blu-ray on January 31.

'Tyler Perry’s BOO! A Madea Halloween' tells the story of Madea being summoned to keep a watchful eye on Brian’s (Tyler Perry) teenage daughter and keep her out of trouble. Little does Madea know, the trouble is coming for her. Fortunately, or not, she has her posse of Bam (Davis), Hattie (Lovely) and Joe to shield off ghosts and killer clowns.

Special features include “Why We Love Madea!” featurette and “Boo! From the Crew” Montage.

Following a nine-month nationwide tour, 'Tyler Perry’s Madea on the Run (The Play)' will also be available on the same date. On the run from the law, Madea hides out at Bam's house, thinking she will lie low. Unfortunately, Bam's house is packed with rambunctious family and friends, and Madea finds herself needing to lay down her own law and drop the hammer!

You can find the latest specs for 'Tyler Perry’s BOO! A Madea Halloween' linked from our Blu-ray Release Schedule, where it is indexed under January 31. 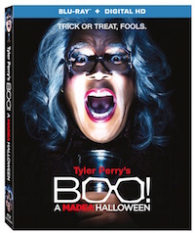 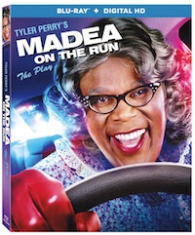