Madea is returning to Blu-ray just in time for the holidays. You can pre-order the movie here.

In an early announcement to retailers, Lionsgate is preparing 'Tyler Perry's A Madea Christmas' for Blu-ray on November 25.

Madea gets coaxed into helping a friend pay her daughter a surprise visit in the country for Christmas, but the biggest surprise is what they'll find when they arrive. As the small, rural town prepares for its annual Christmas carnival, new secrets are revealed and old relationships are tested while Madea dishes her own unique brand of Christmas spirit to all. Starring Tyler Perry, Chad Michael Murray, Tika Sumpter.

You can find the latest specs for 'Tyler Perry's A Madea Christmas' linked from our Blu-ray Release Schedule, where it's indexed under November 25. 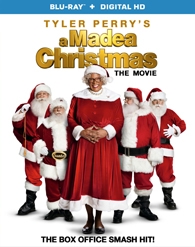 Discs mentioned in this article: (Click for specs and reviews)
Tyler Perry's A Madea Christmas (Blu-ray)