Adam Smith's crime drama available on the Blu-ray format in March has now been fully detailed.

As previously reported, Lionsgate says 'Trespass Against Us' is coming to Blu-ray on March 7.

Trespass Against Us is set across three generations of the Cutler family who live as outlaws in their own anarchic corner of a rich countryside. Chad Cutler (Michael Fassbender) is heir apparent to his bruising criminal father, Colby (Brendan Gleeson) and has been groomed to spend his life hunting, thieving and tormenting the police. But with his own son, Tyson (Georgie Smith) coming of age, Chad soon finds himself locked in a battle with his father for the future of his young family. When Colby learns of Chad's dreams for another life he sets out to tie his son and grandson into the archaic order that has bound the Cutler family for generations. He engineers a spectacular piece of criminal business involving a heist, a high-speed car chase and a manhunt, which leaves Chad bruised and bloodied and with his very freedom at stake.

The release will feature 1080p video, lossless 5.1 audio, and supplements include: Blood Bonds: On the Set of Trespass Against Us - Featurette; and Heartfelt: Director Adam Smith on The Chemical Brothers - Featurette.

You can find the latest specs for 'Trespass Against Us' linked from our Blu-ray Release Schedule, where it's indexed under March 7. 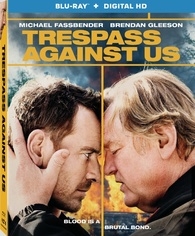