The latest action film starring Taylor Lautner will leap and tumble to Blu-ray in May.

In an early announcement to retailers, Lionsgate will be releasing 'Tracers' on Blu-ray on May 12.

Wanted by the mafia, a new York City bike messenger escapes into the world of parkour after meeting a beautiful stranger.

You can find the latest specs for 'Tracers' linked from our Blu-ray Release Schedule, where it is indexed under May 12. 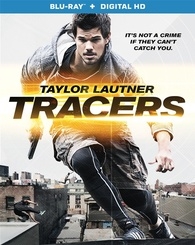