The film co-stars Hilary Swank, Meryl Streep, and James Spader and will arrive in stores in February.

In an early announcement to retailers, Lionsgate will be releasing 'The Homesman' on Blu-ray on February 17.

Set in 1854 on the harsh Nebraska frontier, low-life drifter George Briggs (Tommy Lee Jones) is rescued by a pious, independent-minded woman named Mary Bee Cuddy (Hilary Swank). To pay back his debt, George reluctantly agrees to help Mary transport three women driven mad by the harsh frontier life across the treacherous land - where a kindly minister's wife (Meryl Streep) has offered them hospice. The unlikely pair soon realizes just how daunting the journey will be as the group traverses the vast Nebraska Territories, marked by stark beauty, psychological peril and constant danger.

The Blu-ray will feature 1080p video, a lossless 5.1 soundtrack, and supplements include "Story to Script", "Shooting the Film", and "19th Century Life".

You can find the latest specs for 'The Homesman' linked from our Blu-ray Release Schedule, where it is indexed under February 17. 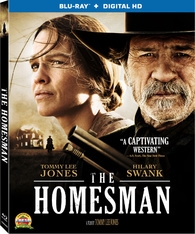