The 1987 Vestron Video horror fantasy is coming to Blu-ray in February.

In an early announcement to retailers, Lionsgate is working on 'The Gate' for Blu-ray on February 28.

When best friends Glen and Terry stumble across a mysterious crystalline rock in Glen's backyard, they quickly dig up the newly sodden lawn searching for more precious stones. Instead, they unearth The Gate — an underground chamber of terrifying demonic evil. The teenagers soon understand what evil they've released as they are overcome with an assortment of horrific experiences. With fiendish followers invading suburbia, it's now up to the kids to discover the secret that can lock The Gate forever . . . if it's not too late.

You can find the latest specs for 'The Gate' linked from our Blu-ray Release Schedule, where it is indexed under February 28. 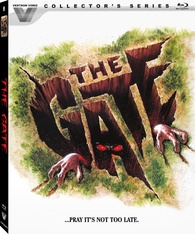