The animated adventure is headed for high-definition this November.

In an early announcement to retailers, Lionsgate is preparing 'The Wild Life' for Blu-ray on November 29.

Embark on a tropical misadventure with a group of quirky animals and their human castaway, Robinson Crusoe. When savage cats invade their paradise, Robinson and the island's animals team up to defend themselves and their home in this fun-filled movie.

You can find the latest specs for 'The Wild Life' linked from our Blu-ray Release Schedule, where it's indexed under November 29. 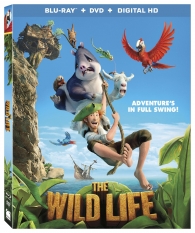