In an early announcement to retailers, Lionsgate and WWE Studios are preparing 'Vendetta' for Blu-ray on August 18.

When his wife is killed by a criminal that he put away, Mason (Dean Cain), a hard-nosed detective, deliberately gets arrested for murder in order to get revenge. While inside, Mason discovers a new criminal enterprise that those behind it would kill to protect.

Specs have yet to be revealed, but supplements will include three featurettes: "The Making of Vendetta", "A Haunted Location", and "A Big Transformation".

You can find the latest specs for 'Vendetta' linked from our Blu-ray Release Schedule, where it is indexed under August 18. 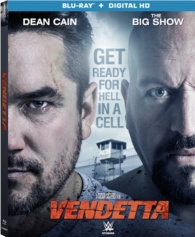