The final season of the Showtime series starring Edie Falco will be admitted to Blu-ray this October.

In an early announcement to retailers, Lionsgate will be releasing 'Nurse Jackie: Season 7' on Blu-ray on October 20.

The twisted and darkly funny Nurse Jackie returns for its final season with Edie Falco as Jackie Peyton, a role that has earned Falco six consecutive Primetime Emmy nominations. Nurse Jackie faces her biggest challenge yet, as the whole truth about her addiction is exposed to everyone. The stakes have never been higher, and the question is, can the world's toughest nurse save herself?

The Blu-ray will feature 1080p video, lossless 7.1 audio, and the package will be loaded with special features including commentaries, behind-the-scenes interviews, and exclusive featurettes.

You can find the latest specs for 'Nurse Jackie: Season 7' linked from our Blu-ray Release Schedule, where it is indexed under October 20. 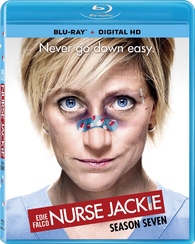