The thriller starring Bruce Willis, John Cusack, and Jason Patric is bound for Blu-ray in October. You can pre-order it here.

In an early announcement to retailers, Lionsgate will be bringing 'The Prince' to Blu-ray on October 28.

A retired assassin is drawn back into the life he gave up when his daughter is kidnapped. To rescue her, he must confront his former rival.

The Blu-ray will feature 1080p video, a lossless 5.1 soundtrack, and supplements include: Audio Commentary with Director Brian Miller and Actor Jason Patric; "Capturing The Prince: Behind the Scenes" Featurette; Interviews with Cast and Crew; and Extended Scenes.

You can find the latest specs for 'The Prince' linked from our Blu-ray Release Schedule, where it's indexed under October 28. 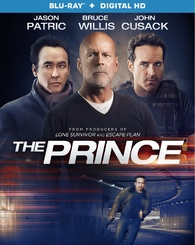