As previously reported, Lionsgate is preparing 'The Man Who Fell to Earth: Limited Collector's Edition' for Blu-ray on January 24.

Thomas Jerome Newton is a humanoid alien who comes to Earth to get water for his dying planet. He starts a high technology company to create the vast fortune he needs to build a return spacecraft and soon becomes a financial tycoon. Instead of moving forward with plans to save his home planet, though, he becomes enamored with his life on Earth.

You can find the latest specs for 'The Man Who Fell to Earth: Limited Collector's Edition' linked from our Blu-ray Release Schedule, where it is indexed under January 24. 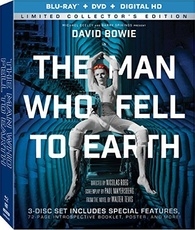