The third adventure in the action-packed franchise will parachute onto Blu-ray this November. You can pre-order it now.

In an early announcement to retailers, Lionsgate will be releasing 'The Expendables 3' on Blu-ray on November 25.

Barney (Sylvester Stallone), Christmas (Jason Statham) and the rest of the team comes face-to-face with Conrad Stonebanks (Mel Gibson), who years ago co-founded The Expendables with Barney. Stonebanks subsequently became a ruthless arms trader and someone who Barney was forced to kill... or so he thought. Stonebanks, who eluded death once before, now is making it his mission to end The Expendables -- but Barney has other plans. Barney decides that he has to fight old blood with new blood, and brings in a new era of Expendables team members, recruiting individuals who are younger, faster and more tech-savvy. The latest mission becomes a clash of classic old-school style versus high-tech expertise in the Expendables' most personal battle yet.

The Blu-ray/DVD/Digital Copy combo pack will include both the theatrical and unrated cuts of the film with 1080p video, a Dolby Atmos soundtrack, and supplements include: The Expendables 3 Documentary, "New Blood: Stacked and Jacked" Featurette, "The Total Action Package" Featurette, "Christmas Runs the Gauntlet" Extended Scene, and a Gag Reel.

You can find the latest specs for 'The Expendables 3' linked from our Blu-ray Release Schedule, where it is indexed under November 25. 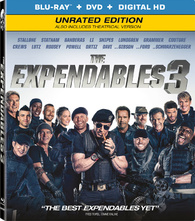