In an early announcement to retailers, Lionsgate will be releasing 'Maggie' on Blu-ray on July 7.

As the nation reels from a lethal virus that turns its victims into zombies, Wade's (Arnold Schwarzenegger) daughter Maggie (Abigail Breslin) has been infected. Now, as Maggie's condition worsens, Wade will stop at nothing to protect her from the authorities seeking to kill her to eradicate the virus.

Specs have yet to be revealed, but supplements include Making Maggie, Director's Commentary, Interviews, and a Deleted Scene.

You can find the latest specs for 'Maggie' linked from our Blu-ray Release Schedule, where it is indexed under July 7. 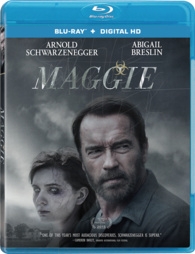