The romantic thriller will arrive on Blu-ray in July.

In an early announcement to retailers, Lionsgate is preparing 'The Adderall Diaries' for Blu-ray on July 5.

Oscar nominee James Franco is riveting as a famous but troubled author whose fascination with a high-profile murder case brings his own dark past into focus. Based on the best-selling book by Stephen Elliott,The Adderall Diaries follows one man’s desperate journey through sex, drugs, and lies as he tries to separate fact from fiction and ignite a life-changing romance. Ed Harris and Amber Heard costar in this gritty story about the shocking discoveries that lie beneath the truth.

The Blu-ray will feature 1080p video, a DTS-HD MA 5.1 soundtrack, and supplements will include: Deleted Scenes; Audio Commentary with Director Pamela Romanowsky; and The Adderall Diaries: A Director's Perspective Featurette.

You can find the latest specs for 'The Adderall Diaries' linked from our Blu-ray Release Schedule, where it's indexed under July 5. 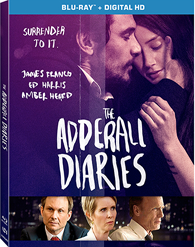 Discs mentioned in this article: (Click for specs and reviews)
The Adderall Diaries (Blu-ray)