In an early announcement to retailers, Lionsgate is set to release 'Barely Lethal' on Blu-ray on August 4.

A teenage special-ops agent (Hailee Steinfeld) yearning for a "normal" adolescence fakes her own death and enrolls as a student in a typical American high school. She quickly learns that surviving the treacherous waters of being a teenager can be more difficult than international espionage.

The Blu-ray will feature 1080p video, a lossless 5.1 soundtrack, and supplements include: Deleted Scenes; Audio Commentary with Director Kyle Newman and Actors Dove Cameron and Thomas Mann; "Back to School: On the Set of Barely Lethal" Featurette.

You can find the latest specs for 'Barely Lethal' linked from our Blu-ray Release Schedule, where it is indexed under August 4. 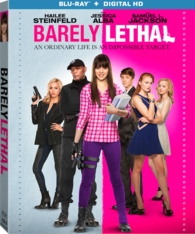