The action thriller will target Blu-ray in July.

In an early announcement to retailers, Lionsgate will be releasing 'Absolution' on Blu-ray on July 7.

When a contract killer (Seagal) encounters a girl on the run from a mob boss (Vinnie Jones) with powerful political ties, he is torn between protecting the girl, and remaining loyal to the government agency that hired him for the mission.

Specs have yet to be revealed, but supplements include: "Behind the scenes of Absolution" featurette; Cast Interviews; and Audio Commentary with Co-Writer/Director Keoni Waxman, Actor Josh Barnett and Producer Binh Dang.

You can find the latest specs for 'Absolution' linked from our Blu-ray Release Schedule, where it is indexed under July 7. 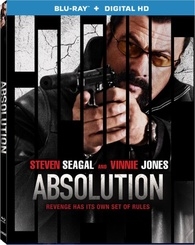