Steven Seagal Has a 'Contract to Kill' this February

The action film is set to arrive on Blu-ray in February.

In an early announcement to retailers, Lionsgate is working on 'Contract to Kill' for Blu-ray on February 28.

Action star Steven Seagal stars as a government enforcer investigating a terrorist plot that leads him and his team to Istanbul. There, they uncover an extremist plan to use drug-smuggling routes to bring deadly weapons — and leaders — into the U.S. To prevent an attack on America, Harmon must turn these two savage forces against one another before his time — and luck — runs out.

Specs have yet to be revealed, but supplements include: The Making of Contract to Kill.

You can find the latest specs for 'Contract to Kill' linked from our Blu-ray Release Schedule, where it is indexed under February 28. 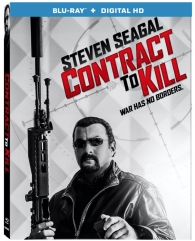