The first season of the action-packed series inspired by the real-life missions of the heroic Navy SEALs will be available on Blu-ray next month.

Lionsgate says 'Six: Season 1' will be available on Blu-ray on March 14.

The combo pack will feature 1080p video, lossless 5.1 audio, and supplements have yet to be revealed.

You can find the latest specs for 'Six: Season 1' linked from our Blu-ray Release Schedule, where it is indexed under March 14. 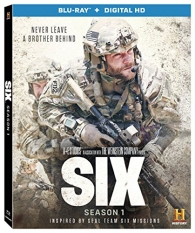