In an early announcement to retailers, Lionsgate says 'Misconduct' will be available on Blu-ray on February 23.

When an ambitious lawyer (Josh Duhamel) is seduced by his ex-girlfriend (Malin Akerman) and presented with evidence incriminating a corrupt pharmaceutical executive that she works for, he finds himself caught in a power struggle between the pharmaceutical magnate (Anthony Hopkins) and his firm's senior partner (Al Pacino). When the case takes a deadly turn, he must race to uncover the truth before he loses not only his wife, but his career, and possibly his own life.

The Blu-ray will feature 1080p video, a lossless 5.1 soundtrack, and supplements include a making of featurette and deleted scenes.

You can find the latest specs for 'Misconduct' linked from our Blu-ray Release Schedule, where it is indexed under February 23. 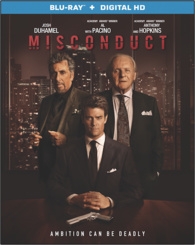