The 1992 action sci-fi starring Jean-Claude Van Damme and Dolph Lundgren has been confirmed for a 4K release in the US.

Following news of a StudioCanal release in Europe, Lionsgate has announced plans to bring Universal Soldier to 4K Ultra HD Blu-ray in the US on November 5.

Soldiers Luc Deveraux (Jean-Claude Van Damme) and Sgt. Andrew Scott (Dolph Lundgren) killed each other in Vietnam. But their demise proves to be just the beginning for the U.S. government, which brings both men back to life decades later for a secret anti-terrorism program.

The 4K Blu-ray will feature 2160p video with Dolby Vision and HDR10, along with a DTS-HD MA 5.1 soundtrack. Supplements will include:

You can find the latest specs for Universal Soldier - 4K Ultra HD Blu-ray linked from our 4K Blu-ray Release Schedule, where it is indexed under November 5. 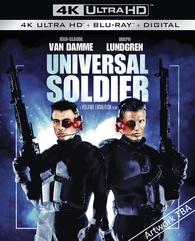