The action-packed thriller will target Blu-ray in January.

In an early announcement to retailers, Lionsgate and WWE Studios will be releasing 'The Condemned 2' on Blu-ray on January 19.

After a failed mission to capture the leader of a deadly gambling ring (Wes Studi), bounty hunter Will Tanner (Randy Orton) becomes the hunted - a human target in a game which forces contestants to kill or be killed. As high rollers bet on who will survive, Will, his father (Eric Roberts), and their fellow teammates wage an all-out war against the deadly game's wicked mastermind (Steven Michael Quezada).

You can find the latest specs for 'The Condemned 2' linked from our Blu-ray Release Schedule, where it is indexed under January 19. 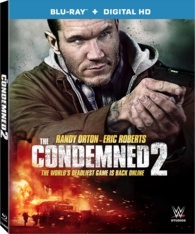