The horror film is slated to be released on Blu-ray this December.

In an early announcement to retailers, Lionsgate and Saban Films are working on '31' for Blu-ray on December 20.

From the visionary mind of the man who brought us House of 1000 Corpses, The Devil's Rejects and Halloween comes the horrific story of five carnival workers who are kidnapped the night before Halloween and held hostage in a large compound. At the mercy of their captors, they are forced to play a twisted game or life or death called 31. For the next 12 hours they must fight for their lives against an endless parade of homicidal maniacs.

Specs and supplements have yet to be revealed, but suggested list price is $24.99.

You can find the latest specs for '31' linked from our Blu-ray Release Schedule, where it is indexed under December 20. 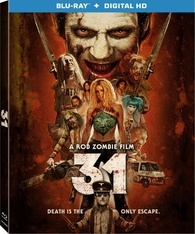