The romantic drama about Barack and Michelle Obama is headed for Blu-ray in December.

In an early announcement to retailers, Lionsgate says 'Southside with You' will be available on Blu-ray on December 13.

On a summer's day in 1989, a law associate named Barack Obama used all his charms to woo attorney Michelle Robinson. Southside with You brings that magical encounter to life as it follows Barack and Michelle on a day-long date that takes them from an art exhibit to a screening of Do the Right Thing to an unforgettable first kiss.

The Blu-ray will feature 1080p video, lossless 5.1 audio, and supplements include: Audio Commentary with Writer/Director Richard Tanne; and Original Art and Animations.

You can find the latest specs for 'Southside with You' linked from our Blu-ray Release Schedule, where it is indexed under December 13. 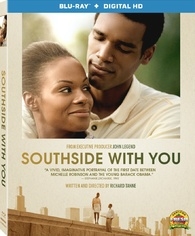