'Return of the Living Dead 3' Bound for Blu-ray

The brain-eating zombies will return to Blu-ray in November.

In an early announcement to retailers, Lionsgate is preparing 'Return of the Living Dead 3' for Blu-ray on November 22.

In Return of the Living Dead: Part II, the chemical Trioxin turned people into flesh-eating zombies. Now, the government is trying to control these unstoppable cannibalistic killers in Return of the Living Dead 3. When a young man uses the chemical to bring his girlfriend back to life after a motorcycle accident, she is driven to eat the only thing that will nourish her...human brains! She tries to stop her own feeding frenzy but a chain reaction has already begun, as hordes of undead are unleashed from their graves!

You can find the latest specs for 'Return of the Living Dead 3' linked from our Blu-ray Release Schedule, where it's indexed under November 22. 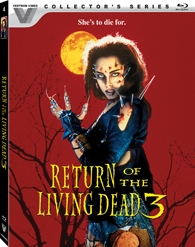 Discs mentioned in this article: (Click for specs and reviews)
Return of the Living Dead 3 (Blu-ray)