The action comedy starring Jackie Chan and Johnny Knoxville is coming to Blu-ray in October.

In an early announcement to retailers, Lionsgate is preparing 'Skiptrace' for Blu-ray on October 25.

For years, by-the-book Hong Kong detective Benny Chan (Jackie Chan) has tried to avenge his partner's murder at the hands of a drug lord. When Benny learns that freewheeling American gambler Connor Watts (Johnny Knoxville) has the evidence he needs, he teams with Connor to get justice. Now all Benny and Connor have to do is survive the fight of their lives — and each other!

The Blu-ray will feature 1080p video, a DTS-HD MA 5.1 soundtrack, and supplements will include: Audio Commentary with director Renny Harlin and When Jackie Met Johnny- Featurette.

You can find the latest specs for 'Skiptrace' linked from our Blu-ray Release Schedule, where it's indexed under October 25. 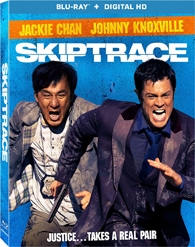 Discs mentioned in this article: (Click for specs and reviews)
Skiptrace (Blu-ray)