The crime drama starring Bruce Willis is heading to Blu-ray in June.
In an early announcement to retailers, Lionsgate is preparing 'Precious Cargo' for Blu-ray on June 28.

Adrenaline-pumping chases and deadly double crosses electrify this twist-filled thriller. After a botched heist, thieves and ex-lovers Jack and Karen (Mark-Paul Gosselaar and Claire Forlani) are targeted by Eddie (Bruce Willis), a murderous crime boss. To escape with their lives, Jack and Karen must steal a cargo of precious gems. But when the job goes down, allegiances are betrayed and lines are crossed as Jack, Karen, and Eddie face off in a fateful showdown.

The Blu-ray will feature 1080p video, a DTS-HD MA 5.1 soundtrack, and supplements will include: "The Making of Precious Cargo" Featurette and Cast/Crew Interviews.

You can find the latest specs for 'Precious Cargo' linked from our Blu-ray Release Schedule, where it's indexed under June 28. 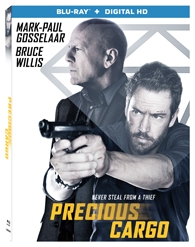 Discs mentioned in this article: (Click for specs and reviews)
Precious Cargo (Blu-ray)