The drama starring Katie Holmes and Luke Kirby heads to Blu-ray this summer.

In an early announcement to retailers, Lionsgate says 'Touched with Fire' will arrive on Blu-ray on June 7.

Katie Holmes and Luke Kirby star as two poets with bipolar disorders whose art is fueled by their emotional extremes. When they meet in a treatment facility, their chemistry is instant and intense, driving each other to new heights. They pursue their passion, which breaks outside the bounds of sanity and swings them from fantastical highs to tormented lows, until they ultimately must choose between sanity and love.

Hailed as "Katie Holmes' best performance in years!" by the Huffington Post, the film was an official selection at the 2015 SXSW Film Festival and a New York Times Critic's Pick. From Executive Producer Spike Lee (Chi-raq) and writer/director Paul Dalio (Faith, Love and Whiskey).

The Blu-ray will feature 1080p video, lossless 5.1 audio, and supplements include: "The Making of Touched with Fire" Featurette; Audio Commentary with Writer/Director Paul Dalio and Producer/Director of Photography Kristina Nikolova; "A Conversation with Paul Dalio and Dr. Kay Jamison" Featurette; Deleted Scene; and Photo Gallery.

You can find the latest specs for 'Touched with Fire' linked from our Blu-ray Release Schedule, where it is indexed under June 7. 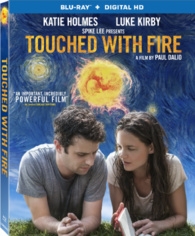