The third season of the Netflix original series heading for Blu-ray in May has now been fully detailed.

As previously reported, Lionsgate will be bringing 'Orange is the New Black: The Complete Third Season' to Blu-ray on May 17.

A new regime has arrived at Litchfield in Season 3 of the Primetime Emmy® Award-winning series “Orange Is the New Black.” With it comes new business interests, spiritual movements, and parental problems that turn life behind bars upside down and ignite power struggles among Litchfield's residents and guards.

The Blu-ray will feature 1080p video, lossless 5.1 audio, and supplements will include: "The Classified Files: Getting to Know the Cast” Featurette; “Sophia: The New Beginning of Laverne Cox” Featurette; Gags; and Audio Commentaries on Select Episodes.

You can find the latest specs for 'Orange is the New Black: The Complete Third Season' linked from our Blu-ray Release Schedule, where it is indexed under May 17. 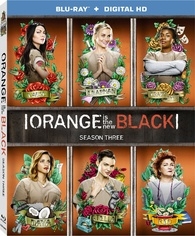