The fourth season of the Netflix series is coming to Blu-ray in May.

In an early announcement to retailers, Lionsgate is preparing 'Orange Is the New Black: The Complete Fourth Season' for Blu-ray on May 9.

"Orange Is the New Black is better than ever in its dark, dauntless fourth chapter." - THE BOSTON GLOBE. New faces and old resentments make for a potentially volatile blend, especially now that Litchfield is a for-profit business. Overrun with new inmates and overseen by inexperienced guards, the prison undergoes an unprecedented culture war. From Jenji Kohan, the creator of Weeds, Orange Is the New Black is a thought-provoking, funny, and evocative show about life in a women's prison. Nominated for 17 Primetime Emmy Awards, with 4 wins to date. Based on the best-selling memoir by Piper Kerman, the newest season of Orange Is the New Black delves into the racial and economic tensions that run rampant in the halls of Litchfield.

You can find the latest specs for 'Orange Is the New Black: The Complete Fourth Season' linked from our Blu-ray Release Schedule, where it's indexed under May 9. 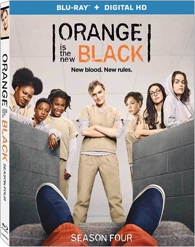 Discs mentioned in this article: (Click for specs and reviews)
Orange Is the New Black: The Complete Fourth Season (Blu-ray)