The fresh and insightful comedy starring Ben Stiller and Naomi Watts arrives on Blu-ray next month.

In an early announcement to retailers, Lionsgate is working on 'While We're Young' for Blu-ray on June 30.

After Josh (Stiller) and his wife Cornelia (Watts) meet a free-spirited twenty-something couple (Adam Driver and Amanda Seyfried), they adopt a new lifestyle complete with hip-hop dance classes and mind-expanding parties. But with each hilarious attempt to act young, Josh and Cornelia start to appreciate the rewards of growing old together.

The Blu-ray will feature 1080p video, a lossless 5.1 soundtrack, and supplements include six behind-the-scenes vignettes.

You can find the latest specs for 'While We're Young' linked from our Blu-ray Release Schedule, where it is indexed under June 30. 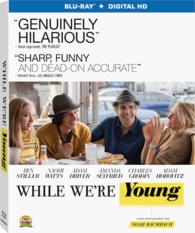