In an early announcement to retailers, Lionsgate is working on 'Mr. Church' for Blu-ray on October 25.

'Mr. Church' tells the story of a unique friendship that develops when a little girl and her dying mother retain the services of a talented cook – Henry Joseph Church. What begins as a six-month arrangement instead spans fifteen years, and creates a family bond that lasts forever.

The Blu-ray will feature 1080p video, a lossless 5.1 soundtrack, and supplements include: Food on Film; Based on a True Friendship; Britt Robertson Interview; and Eddie Murphy: Doing a Drama.

You can find the latest specs for 'Mr. Church' linked from our Blu-ray Release Schedule, where it is indexed under October 25. 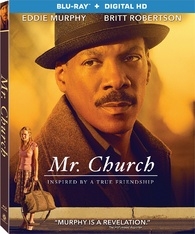