Ryan Reynolds and Ben Mendelsohn take a gamble on Blu-ray in December.

In an early announcement to retailers, Lionsgate will be releasing 'Mississippi Grind' on Blu-ray on December 1.

Down-­on-­his-­luck gambler Gerry (Ben Mendelsohn) and his hot-­-streak buddy Curtis (Ryan Reynolds) hit the road for New Orleans, on the hunt for the big payday. On riverboats and racetracks they chase women and thrills-before risking it all in the wager of their lives.

The Blu-ray will feature 1080p video, lossless 5.1 audio, and supplements include Two of a Kind: On the Road with Mississippi Grind" Featurette.

You can find the latest specs for 'Mississippi Grind' linked from our Blu-ray Release Schedule, where it is indexed under December 1. 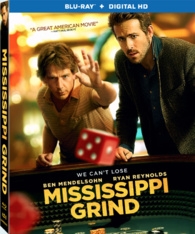