'Middle School: The Worst Years of My Life' Blu-ray Bound

The PG comedy will be available in stores in January.

In an early announcement to retailers, Lionsgate is working on 'Middle School: The Worst Years of My Life' for Blu-ray on January 3.

The New York Times best-selling series by James Patterson breaks all the rules when Middle School: The Worst Years of My Life arrives on Blu-ray from Lionsgate and CBS Films. Rafe has an epic imagination…and a slight problem with authority. Both collide when he transfers to a rule-crazy middle school. Drowning in do's and don'ts, Rafe and his best friend Leo hatch a plan to expose the principal by breaking every rule in the school's Code of Conduct. As the principal strikes back, Rafe's world, at home and at school, explodes into hilarious chaos (both real and imagined) in this laugh-filled family comedy based on James Patterson's best-selling book series.

You can find the latest specs for 'Middle School: The Worst Years of My Life' linked from our Blu-ray Release Schedule, where it is indexed under January 3. 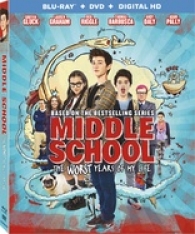