In an early announcement to retailers, Lionsgate will be releasing 'Backtrack' on Blu-ray on April 28.

From the acclaimed writer-director, Michael Petroni (The Book Thief), the suspenseful film keeps audiences on the edge of their seats as the shocking story unfolds.

Psychologist Peter Bower's life is thrown into turmoil when he discovers that the patients he has been seeing are ghosts. Risking his own sanity, Peter delves into his past to uncover a terrifying secret which only he can put right.

The Blu-ray will feature 1080p video, lossless 5.1 audio, and the only supplement is "The Psychology of Backtrack" Featurette.

You can find the latest specs for 'Backtrack' linked from our Blu-ray Release Schedule, where it is indexed under April 28. 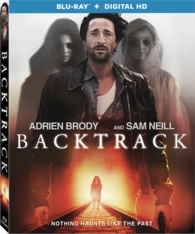