The mysterious crime thriller heads to Blu-ray in May.

In an early announcement to retailers, Lionsgate is set to release 'Cut Bank' on Blu-ray on May 26.

Looking to leave his sleepy town of Cut Bank, Dwayne McClaren (Liam Hemsworth) hatches a get-rich scheme to get himself out. But when Dwayne's plan backfires and he's swept into a murder investigation led by the local sheriff (John Malkovich), he discovers that Cut Bank is a small town full of big - and deadly - surprises in this star-powered thriller filled with clever plot twists, dark humor and a gallery of unforgettable characters.

You can find the latest specs for 'Cut Bank' linked from our Blu-ray Release Schedule, where it is indexed under May 26. 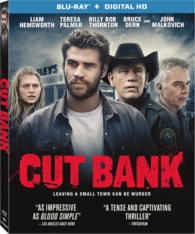