Marjane Satrapi's 'The Voices' Dated and Detailed for Blu-ray

In an early announcement to retailers, Lionsgate will be releasing 'The Voices' on Blu-ray on April 7.

Jerry (Ryan Reynolds) is that chipper guy clocking the nine-to-five at a bathtub factory, with the offbeat charm of anyone who could use a few friends. With the help of his court-appointed psychiatrist (Jacki Weaver), he pursues his office crush (Gemma Arterton). However, the relationship takes a sudden, murderous turn after she stands him up for a date. Guided by his evil talking cat and benevolent talking dog, Jerry must decide whether to keep striving for normalcy, or indulge in a much more sinister path.

The Blu-ray will feature 1080p video, a lossless 5.1 soundtrack, and supplements include deleted and extended scenes, "making of" featurettes, a VFX behind-the-scenes look and a comparison showreel, animatics, a sketch gallery and a recording session with Ryan Reynolds as he creates the voices of "Bosco" and "Mr. Whiskers."

You can find the latest specs for 'The Voices' linked from our Blu-ray Release Schedule, where it is indexed under April 7. 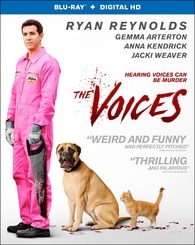