The first season of the explosive new series heading to Blu-ray in April has been fully detailed.

As previously reported, Lionsgate is set to release 'Manhattan: Season One' on Blu-ray on April 7.

The Blu-ray will feature 1080p video, a lossless 5.1 soundtrack, and supplements include: "Ground Zero: Bringing the Bomb to Screen", "P.O. Box 1663: Creating a City that Didn't Exist", "'Now I Am Become Death': J. Robert Oppenheimer", "Recreating an Era: 'Manhattan' Costume Design", and select episode audio commentaries with Cast and Crew.

You can find the latest specs for 'Manhattan: Season One' linked from our Blu-ray Release Schedule, where it's indexed under April 7. 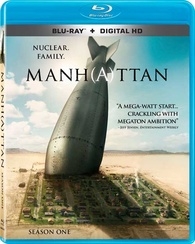