Locked and Loaded: 'Code of Honor' Dated for Blu-ray

In an early announcement to retailers, Lionsgate will be releasing 'Code of Honor' on Blu-ray on July 5.

When his family is killed in a drive-by shooting, Robert Sikes (Steven Seagal), a former Special Ops operative, vows to rid his city of every last criminal. Sikes's former protégé, FBI agent Porter (Craig Sheffer), with help from a witness, tries to find his vigilante friend before the police — or the maniacal mobster Romano — are able to.

You can find the latest specs for 'Code of Honor' linked from our Blu-ray Release Schedule, where it is indexed under July 5. 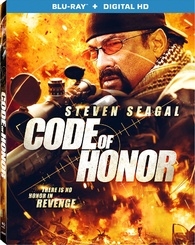