The sixth season of the pioneering family series is headed for Blu-ray in a few weeks.

In an early announcement to retailers, Lionsgate is working on 'Little House On The Prairie: Season Six' for Blu-ray on July 14.

When Almanzo Wilder and his sister Eliza Jane move to Walnut Grove in the sixth season of this cherished series, life will never be the same for Laura Ingalls. Fully restored and remastered, all 24 uncut episodes shine with quality picture and sound, bringing new excitement to memorable moments like Mary’s stagecoach accident, Albert’s challenging adoption, Nels’ reunion with his circus sideshow sister, Laura and Mary’s captivity by escaped convicts, the fatal fire at the school for the blind, Almanzo’s unrequited marriage proposal to Laura and countless more must-see moments!

The Blu-ray will feature 1080p video, a lossless 2.0 soundtrack, and supplements will include The Little House Phenomenon - Part Six: A Lasting Legacy.

You can find the latest specs for 'A Little Chaos' linked from our Blu-ray Release Schedule, where it is indexed under July 14. 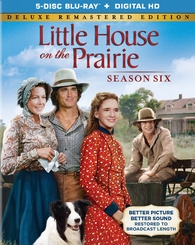