The show's final season is coming to Blu-ray in April.

In an early announcement to retailers, Lionsgate is preparing 'Little House on the Prairie: Season Nine' for Blu-ray on April 19.

It's a fond farewell for the Ingalls, in the ninth and final season of this unrivaled series, when they decide it’s time to leave their "little house." Relish all 21 uncut episodes filled with exciting changes like when the Wilders take in their sweet niece Jenny; when Laura wins a book-writing contest; when a jealous Nancy runs away; and when Willie surprises the family with his engagement. Enjoy the final, heartwarming moments of the much-loved series, restored and remastered for superior picture and sound.

You can find the latest specs for 'Little House on the Prairie: Season Nine' linked from our Blu-ray Release Schedule, where it's indexed under April 19. 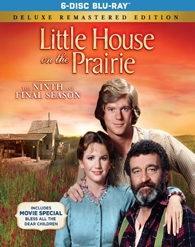 Discs mentioned in this article: (Click for specs and reviews)
Little House on the Prairie: Season Nine (Blu-ray)