The comedy starring Kevin Spacey and Danny DeVito is heading to Blu-ray in May.

In an early announcement to retailers, Lionsgate is preparing The Big Kahuna for Blu-ray on May 30.

Academy Award® winner Kevin Spacey and comedy legend Danny DeVito star in this hilarious story of two industrial lubricant salesmen trying to land the biggest client of their careers. Larry (Spacey) and Phil (DeVito) are jaded salesmen scheming to score some big business from a major client. But when they decide to throw a lavish cocktail party in a swank hotel's hospitality suite, it's a newbie sales associate (Peter Facinelli), who threatens to hook the Big Kahuna!

You can find the latest specs for The Big Kahuna linked from our Blu-ray Release Schedule, where it's indexed under May 30. 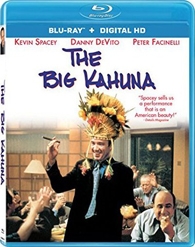 Discs mentioned in this article: (Click for specs and reviews)
The Big Kahuna (Blu-ray)